Sunday, January 15th. It’s the time of the great finals of ESN Football League. From 4 teams (Stupidos CF, SCIFT, Stary Rynek and Iceland) which joined in the tournament at the begining of November, the matter of final triumph was solved between Stary Rynek and Iceland. In spite of players’ equal level of skills, the victory went to the first team mentioned. The third place belonged to SCIFT team. Additionally, the organizers have chosen the best goalkeeper (Pedro Medina Palomino) and the best scorer (Gökmen Kınık) and awarded them with individual prizes. We want to congratulate the winners and all participants!

Wednesday, January 18th. One more time we payed a visit in Józef Wybicki Junior Highschool numer 56 as part of Erasmus in School project. We were accompanied by Emilia from Bulgaria, Rosa from Croatia and Celso from Portugal, who showed short presentations and videos about their countries. At the end, our foreign students were answering to a ton of questions asked by polish pupils.

Saturday, January 21st. From the early morning we have organised language workshops for highschool students „Chat that up (ZaGadaj – DoGadaj)” in Jowita Dormitory. The main topic of the event was the communication considered in all aspects. The goal? To break the language barrier which limits us. Erasmus+ programme students from Bulgaria, Australia and Croatia helped us to carry out the workshops. The variety of games, tasks and discussions didn’t give us the chance to be bored. 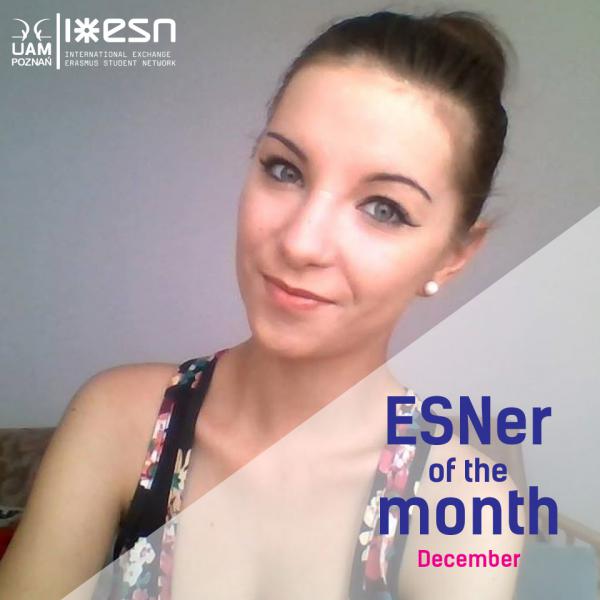 Many things can become boring rather quickly. ESN is not one of these things. Our new ESN-er of the month - Marlena Rusin - fifth year student of Spanish, is the best example. Born in Włocławek, a beautiful city situated on the bank of the Vistula river, she likes to read, listen to music - especially rock - and she also dances... bellydance! In spite of having numerous passions, Marlena is a very active member of ESN, and she was finally given credit for it.

ESN Weekly News: You have extensive experience in ESN. For two years you were a member of ESN UMK Toruń, and now you are in ESN UAM Poznań. What does ESN give you, that you decided to be still associated with this organization after relocating? Is there much difference between ESN sections in those two cities?

MARLENA: ESN constitutes a huge part of my college life. I cannot imagine this period of my life without our organization. I met many interesting people, not only from Poland, but from the whole Europe. I was given a chance for personal development and for overcoming my own weaknesses. There is a substantial difference between two sections. Most importantly, the number of Erasmus+ students. In ESN UMK Toruń there was around 100 of them, so our events were much smaller.

EWN: In Toruń, as well as in Poznań, there is a wide offer of student organizations. Have you ever been a member of some other organization during those five years?

MARLENA: No, I was totally absorbed by ESN, but we sometimes cooperated with other organizations in ESN UMK Toruń. Actually, even in highschool I wanted to be an ESN member. My brother, who loves to discover new cultures, has told me a lot about this organization and about Erasmus+ program. He made me want to join ESN before I was a student.

EWN: You said that working with Erasmus students and in two ESN sections has helped you meet many new persons. Did you have, or maybe you still have, friends among Erasmus students?

MARLENA: I never decided to go on the exchange, because I lacked courage. If I could, I would go to Spain or Italy, because I hold those countries very dear, as I have studied their language and culture for three years. But staying in Poland I managed to meet many Ersamus student, and I maintain contact with some of them. I even visited visited few of my Erasmus friends, and I they were also my guests in Poland. I think of some of them as of my friends and I certainly won't forget them. 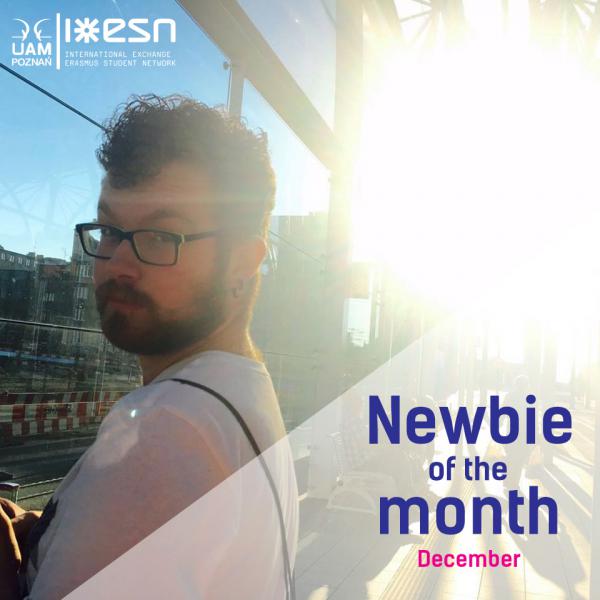 Meet Dominik Kurzawski, a third year student of Eastern Studies, who came to Poznań from Bełchatów. In October he got involved in the activities run by ESN UAM Poznań, and afterwards he became a new coordinator of the ExchangeAbility Project, whose main goal is to overcome barriers between people with disabilities and the rest of the society. That is not the end of his brilliant career, namely, Dominik was awarded the title of the newbie of the month in December! How did he earn it? Look for the answer to this question in the interview below!

ESN Weekly News: An event that you coordinated, and which turned out to be a great success, was a Christmas event called “Paint the Carol”. Could you tell us a few words about its aim?

DOMINIK: “Paint the Carol” project consisted in Erasmus students painting internationally known Christmas carols, or the ones originating from their own countries, in such a way that a deaf person when looking at a painting could instantly recognize what the carol is about and could feel unique Christmas magic, just as people who do not have their hearing impaired can. The authors of the pictures, in turn, had a chance to discover that Christmas carols can also be “heard” in a different, alternative way, and, simultaneously, they could expand their horizons. Afterwards, we gave our works of art to sick children in hospital, so that their Christmas could be filled with more magic and joy.

EWN: That was a really original idea, congratulations. Are you planning some other equally interesting events?

DOMINIK: A lot of projects are under way, some of them require more amount of effort than others, currently we are about to start a “MapAbility” project at our university. We are going to show how well our university is accessible to students with disabilities and special needs, where such accessibility still lacks, and what can be improved. It definitely takes time and commitment, but its effect will last for many years! Also, a special, all-Poland event, an ExchangeAbility Week, is being planned. It will take place in March. But I will not reveal more details for now. :)

EWN: ExchangeAbility is a very important project, deserving special attention. It helps to overcome barriers occurring between healthy individuals and disabled ones. What made you apply for a position of a coordinator of this project?

DOMINIK: There are a couple of reasons. Above all, I am also a disabled person, suffering from spinal muscular atrophy, and sometimes I struggle with different obstacles in my everyday life. Despite this, I am active, I move between places and I travel all over the world. By applying for a position of a coordinator I wanted to show that being disabled means... being able. Being able to do things during a trip, in your life, at a party. Everywhere. Thus, I can say that I am an example of a disabled person overcoming barriers, and as a coordinator I have an opportunity to talk about this and show this to a wider audience. What is more, in this way I can change many people’s attitudes. People often do not know how to react to and how to behave towards a person with a disability. It mainly boils down to being aware that sometimes a little help is needed, such as holding out your hand while going up the stairs. And apart from that, we, the disabled, can manage perfectly well on our own. So, people... no stress! My personal Erasmus+ exchange was also an important factor that influenced the decision to apply. Sometimes I just lacked a helping hand, like somebody who could help me carry a suitcase up the stairs. I wanted to become the ExchangeAbility Project coordinator in order to have a chance to help others, to fill the gaps which bureaucracy is not able to skip, and in order to raise disabled people’s awareness so that they get convinced that when going on an Erasmus+ exchange they will also be able to cope!