Sunday, December 11th. 11th edition of Poznan STIHL Ice Festival, which is the international festival of the ice sculptures attracted to the Poznan Old Market Square thousands of people. We and our foreign guests could not miss us this event! Erasmus students, delighted and surprised by the scale of the event, despite the inclement weather willingly took pictures and sculptures typical of the winners. This year's winners were Poles, who carved out of ice ongoing duel kangaroos.

Monday, December 12th. Again we visited the Private Kindergarten English-speaking "Academy Smyk" in the framework of project Erasmus in School.This time accompanied us three foreign students - from Portugal, Spain and Slovakia. Together with two groups of preschoolers we prepared Christmas cards and played games, by the way where Erasmus students told the children about Christmas traditions and foods from their own countries and signed off on a pre-prepared cards, greetings in their national languages.

Thursday, December 15th. Just like last year,on the Old Market in Poznan, just under the building of the Town Hall, hosted an international carol singing. People from different parts of the world, accompanied by the Mayor, Mr. Jacek Jaśkowiak, sang together the world's most famous Christmas carol - Silent Night (pol. Cicha Noc) - in many languages. For all carolsingers were waited a free refreshments in the form of hot tea and borscht. There were also pre-holiday demand and breaking the wafer.

Friday, December 16th. All lovers of photography had the opportunity to learn something new and use it in practice, on the occasion of the meeting under the slogan Give it a shot. In the cozy bar BYŁO nie BYŁO over coffee and hot chocolate we talked about the rule of thirds (rule of thirds used in photography), exchanged our experiences and photographic tips and compared our cameras. After the theoretical part we went to the town and used the new knowledge into practice.

In the Hall Śniadeckich (Collegium Maius UAM) was held International Christmas Eve, during which Vice-Rector for Student Affairs AMU, Professor Bogumiła Kaniewska, applied to all students Christmas wishes. Similarly, on behalf of the ESN UAM Poznan, made it our President - Kaja Janiszewska. In addition, the sounds of Christmas songs and surrounded by Christmas Eve dishes, four students - from Malta, Australia, Turkey and Taiwan - told about the Christmas traditions of their native countries. 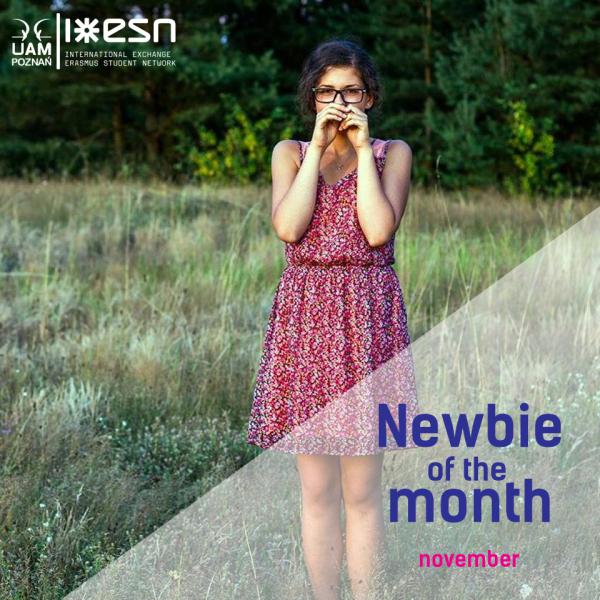 Meet Natalia Zielińska, a student of Elementary education and English language. Natalia comes from Lubin. She is interested in music and foreign languages, and in her free time she likes traveling and chilling out while listening to her favorite music, and with a mug of aromatic coffee in her hand. She joined ESN UAM Poznań in October. How did she earn the title of the Newbie of the month? With her above-average activity, great involvement in the organization of many events and her participation in them. Natalia also decided to become a coordinator of our new project – Cool’ture – and so far she has been perfectly carrying out her responsibilities. Below you can find a short interview with Natalia.

ESN Weekly News: You became the Newbie of the month thanks to the amount of effort you put into the activity of the section. In what projects have you taken part so far? And from where do you get so much willingness to act?

NATALIA: I am trying to not limit myself to a few, specific projects and so I help wherever help is needed at the moment. Nonetheless, I have a couple of my favorites where I feel the most fulfilled. These are: SocialErasmus, because I find greater pleasure in giving than in taking and, in a way, it is connected to the degree I am doing; Event project, since it integrates both Erasmus students and section members in the best way; ExchangeAbility, because it is a project that deserves particular attention, it has considerable potential and, above all, it helps to make others aware that the Erasmus+ program has no limitations. And, of course, the Cool’ture project, of which I have recently become a coordinator.

From where do I get so much willingness to act? As my relatives say, I am a born community worker. If I am able to do something good for others, I always willingly undertake the challenge.

EWN: What made you join ESN UAM Poznań? Did you want to become a coordinator of some project from the beginning?

NATALIA: First, I joined the Mentor Program, and only later did I find out what ESN really was. Right after the high school-leaving exams I moved abroad, so I understand how it feels to be “new” in a completely different country without your family and friends, and that is why I decided to join this organization. To be honest, after the first information meeting I was not sure if it was a suitable organization for me and if I would be able to find my place in it, but after my recruitment interview with Angelika Grzeszkiewicz I was bitten by the ESN bug, and it was her who convinced me that I should apply for a position of one of the project coordinators.

EWN: What are your plans concerning future events within the Cool’ture project?

NATALIA: Together with my team (ESN members cooperating within the Cool’ture project – editorial note), we would certainly like to continue with the tradition of Eurodinners, which have always enjoyed great popularity. We also have several “fresh” ideas, which we hope to carry out. Definitely there will be a lot of outings to the cinema, to the theater and on various kinds of cultural events in Poznań and nearby. I would surely like to see this project flourish so as to show Polish culture and traditions to Erasmus students in the best possible way, which would in turn bring smile on many faces and evoke only fond memories.